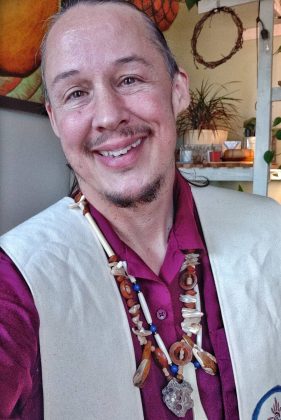 Join us on Zoom  in conversation with a.c.ramírez de arellano, the current artist featured in Friendly House’s Community Gallery through December 27, 2021.

Preregistration is required. Email or call the Friendly House Front Desk to register: frontdesk@fhpdx.org or call 503-228-4391.

Celebrated artist a.c.ramírez de arellano’s work focuses on gender and Indigenous issues. They take inspiration from ancestral stories and the experience of living in the Pacific Northwest for almost 30 years. Creating large pieces of art, working with leather, oil on canvas, and mask making, their work tells a story of overcoming barriers, and the impact of colonialism at the intersection of their disabled, Indigenous, and queer communities.

Like many Indigenous peoples who push back against erasure and are writing themselves and their Tribal Nations back into history through their art, they utilize art as a form of story telling, to break down barriers, and move forward. A recipient of the Gay and Lesbian Archives of the Pacific Northwest 2017 Queer Heroes Award, they have also been interviewed frequently on OPB’s Think Out Loud and Portland’s Race Talks, as well as by PRIDE Northwest, and NPR’s The Takeaway. a.c.ramírez de arellano has worked artistically with the City of Portland, Beaverton School District, Indian Education, Portland Public Schools, Applegate Native American Head Start, Multnomah Art Center, Multnomah County Library, Southern Oregon University, Portland State University Indigenous Nations Studies Program, Portland Community College, Native American Youth and Family Center (NAYA), Future Generations Collaborative, as well as having appeared in a number of publications.

a.c.ramírez de arellano lives in Portland, Oregon with their young daughter where they tend to dozens of varieties of tropical and non-tropical plants in their indoor and outdoor gardens. They are a chosen cultural keeper and involved in their ancestral language revitalization project, Hiwatajianiwa.